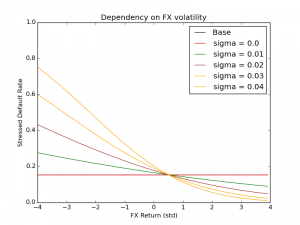 Warren Buffet famously declared financial derivatives as weapons of mass destruction (although apparently this did not prohibit him from using them when convenient). The leverage afforded by such contracts, their potential complexity, or simply their novelty which may imply lack of understanding, are some reasons why one would classify them as potential contributors of systemic risk, which is a polished rephrasing of the more popular this sucker is going down quote.

But it would be erroneous to assume that the only financial products that can inflict large scale economic damage come in derivatives form. The defining feature of high risk cotnracts is not so much if cash is exchanging hands upfront or not. Instead,

The case of Foreign Currency Loans

You’d be forgiven (and blessed) if you have never heard of this type of product. It means you live in a hard currency country and your loan or mortgage is denominated in the same currency as your salary or other financial means. Reams and reams have been written about US subprime mortgages and their role in the financial crisis (the latest installment being the movie Big Short)

Yet at the same time, almost invisible to the Western media machine, in the eastern outskirts of Europe - from the Baltic all the way to the Balkans - the last decade saw the proliferation and eventual detonation of a type of loan that was denominated in hard currency (Euro or Swiss Frank) instead of the local currency of each of these countries.

Of course the increase in volume of such products occurred at a time of large interest rate differentials between local and foreign currencies. Borrowers would at once appear more credit worthy and afford a larger size loan. So they imbibed with abandon. Yet it is very unlikely they understood the risks involved:

Ordinary borrowers have a hard time assessing correctly their own risk profile, let alone in combination with the exchange rate of a foreign country moving by 30% within the next five years

While defenders of the practice argued that only wealthy borrowers took out such loans, apparently in some countries up to 70% of the loan stock was FX denominated, which does not seem compatible with the common wealth distribution curves.

What happened in the end? The problem with embedding currency rates in basic loan products is that in markets anything that is not fixed will eventually move. So, in due course, exchange rates did move, and substantially so, creating havoc in the finances of millions of eastern European households, requiring massive state intervention, restructuring etc. etc.

As with other risk management and regulatory failures exposed by the financial crisis, there is now significant pressure to control the risks associated with this type of product. The European Banking Authority has released for consultation a Draft methodology for stress testing and the stress testing of FX lending figures prominently and there is specific guidance for additional capital requirements for FX lending under ICAAP/SREP. That latter intervention is of course necessary since Basel Pillar I methodologies are oblivious to the additional risks embedded in such loans versus the typical risk profile of a bank portfolio.

It turns out it is not excessively difficult to extend standard credit risk modelling tools to capture the increased risks of FX lending in a consistent way. It would come as no surprise that the volatility of the FX rate plays a key role. But the degree of deterioration might be indeed very rapid. You can find out more about our FX lending stress testing methodology by reading our white paper on the topic here.

As always, feedback is welcome!