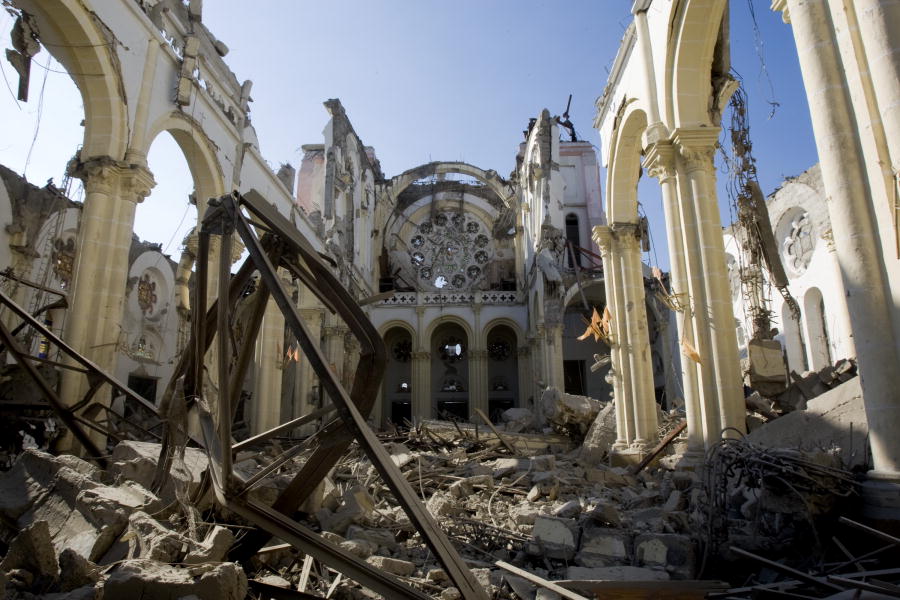 The mystery of the collapsed cathedral:

You walk to the center of an old city and you see its glorious cathedral lying in ruins. What in the world has happened here? Your investigative instinct goes into overdrive. This is not supposed to happen. Not in peacetime anyway. How can it be that this magnificent edifice, after gracing the town’s central square for who knows how many centuries, is now little more than a rubble pile in the center of town?

All those years of reading detective and crime stories are now flushing your brain with possibilities, scenarios, lines of approach, patterns, motives, usual and unusual suspects. You get down to work to figure out the mystery. Who knows, you might even make a name for yourself if you solve this one! Whodunit?

Was it possibly an earthquake? That extreme event could certainly have done it. The energy release when the earth trembles can bring down easily any mighty cathedral. Yet this is no earthquake territory. Around this part of the world, the chances of an earthquake that is vicious enough to bring on this calamity is only one in ten thousand years. Was the cathedral so particularly unlucky? Does not seem likely.

Anyway, such an earthquake would probably have razed the entire city to the ground, which is manifestly not the case. You look around and you notice that the old town around the cathedral has taken real damage, but is still, by-and-large, intact. It actually looks like the damage sustained by the neighboring structures is indeed only collateral damage, maybe from debris being hurled from the cathedral itself as it was collapsing. The cathedral was, after all, oversized and towering over the middle of the town. It seems that in this disaster, rather than protecting the town, the cathedral became its nemesis.

Was it maybe sabotage? Did some external factor, jealous of the preeminence of this architectural wonder, get sneakily involved? You look for traces of explosives or other evidence of foreign substances but you find none. No, if some foreign enemy was envious of the glory of this ancient structure, they did not seem to have used any foul play to bring it down.

Your list of suspects starts getting shorter and shorter. You recall vague stories of the elusive black swans, terrifying birds that come out of nowhere and create instant havoc. But you dismiss the thought as ridiculous. While you admire Hitchcock’s The Birds as much as the next film buff, the thought of a flock of black birds attacking a cathedral and transforming it into dust and strewn stones is too absurd to sustain. In any case, empiricist as you are, you remark that there are no dead birds around, not even a single black feather from a swan’s tail. No, what happened here was pervasive and powerful, nothing to do with freakish representatives of the animal kingdom.

You quickly establish that there is no evidence of an external attack. You are slowly drawn to a painful reductio ad absurdum: The causes behind the disaster appear linked to the cathedral itself more than anything else. As implausible as it may seem, you realize that the entire construction might have just imploded, doomed by its own pompous weight!

Now, you are just a tourist in these lands and you don’t know too much about cathedral design. It is rumored that cathedral blueprints require the most advanced mathematics to understand. Just rumors, of course, these secret designs are never disclosed as that may diminish the splendor of the architectural achievement. But you approach this challenge with the simple mindedness of a man from the street, that has just walked up to an imploded pile of stones: if extreme bad luck and external factors have been excluded then either the blueprint was wrong, or the blueprint was correct - but it was not implemented correctly.

Thankfully you don’t need to figure out if every menacing stone gargoyle or the countless pointed spires of the elaborate facade were done to specification. No, there is really only one structural element to focus on - the stuff that holds the weight of the cathedral, namely its foundations and load bearing pillars. You look around the debris and you can make out indeed that the structure used to rest on three main pillars, which was pretty standard for cathedrals from this era.

As you peek around the foundations, and the once mighty supporting pillars, the painful truth emerges slowly. The grand cathedral succumbed to the oldest con trick in masonry. The townsfolk contracted out (by necessity) their dream building to specialized itinerant workmen. These scoundrels could not resist unscrupulously augmenting their profit by skimping on material. Where the blueprint was calling for a ton of solid granite, they would procure a half, and fill the rest with rubble. Whether they knew or cared that the cathedral might collapse as a result of this optimization exercise is forever lost in the misty passages of time.

Mystery solved. Or is it?

Something doesn’t quite stack up (no pun). Yes, the foundations were obviously eroded and weak. Yes, it was a matter of time before a modest tremor would take its unnecessarily harsh toll. The blueprint was obviously not executed correctly. But where were the townsfolk? What did they do when they saw the first cracks in the walls, which they surely must have seen? Why didn’t they erect flying buttresses to support the walls? You come to realize that it wasn’t just the fraudulent subcontractors that were to blame. No, alas, the cathedral had lost its true support, the faith of its congregation. The static foundation was eroded all right, for the above mentioned economic reasons, but collapse came only because the confidence that something could be done to save the building was not there.

Why was this so? You have reached the limit of your analytic insights here, but you suspect that the weary believers turned into dis-believers, realizing that where there was one malfeasance, there were probably many more and there was no point of throwing their efforts behind a doomed construct. The cathedral’s design lacked any assurance that a few initial cracks will not quickly escalate into a bigger and bigger chasm.

Not only was the blueprint not executed properly, it was deficient to start with.

What a disheartening but at the same time illuminating story this was! And how relevant, by complete coincidence of course, with the plight of banks in the post-crisis evaluation of their financial rubble.

We might say, by analogy, that the faulty foundation was the size and quality of the so called risk capital, namely what the banks were holding in capital to support themselves, according to their own blueprints. This internal calculation was maybe adequate by design, but was certainly not adequate in implementation.

Yet what the bank capital foundation blueprint definitely lacked was any confidence building elements. Namely a capital framework that would explicitly address (and protect from) the likelihood that future anticipated losses might prevent from rolling over of short term debt.

From Economic Capital to Confidence Capital

A first take on confidence capital, an extension of the concept of economic capital that takes into consideration how internal calculations can safeguard the going concern nature of a firm is available as an Open Risk WhitePaper: Confidence Capital: The Principle. You can download the paper here. We welcome your feedback.

The Collapsed Cathedral image is licensed under creative commons by UN Photo/Marco Dormino. There is no endorsment by the creator for the use of their work. The image is used as allegory, with full respect for the innocent victims of the Haiti earthquake.