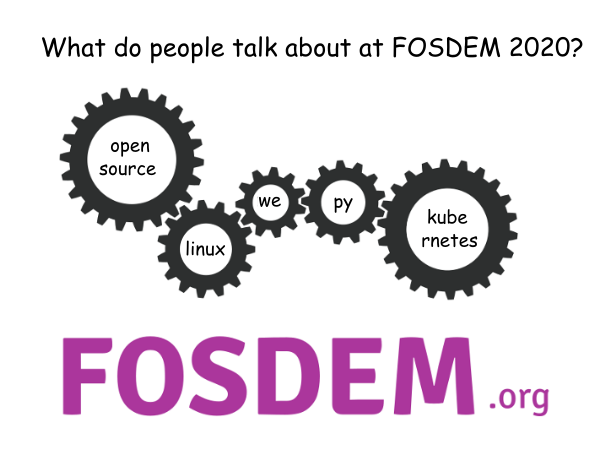 FOSDEM is a large event (2 days, 8K+ participants, 800+ talks) which makes it a reasonable snapshot of the current state of the open source universe. The schedule of all talks (including abstracts) is available here, so we can attempt to get a glimpse at what the open source community is up to those days (or at least what they want to talk about)

The data set consists of the 835 talk descriptions (Available at the above linked xml file). The text of each talk description is pre-processed using NLTK to extract the unique keywords used in each talk. Once this is done we simply look at the frequency with which these unique keywords occur across multiple talks. Each keyword is thus assigned a frequency of occurence across the conference, while controlling for any speaker being particularly fond and loquacius in their use of a keyword in any particular description. To avoid spurious accuracy the frequency is rounded to no decimal digits. Given the nature of the distibution this means it is very crowded at the 0% and 1% buckets.

So, what are people talking about at FOSDEM 2020?

Here are the main (unashamedly subjective) observations, roughly in order of decreasing frequency. But do read till the end, because frequency is not the only measure that matters!

Well, there are many, but this is blog post meant to highlight the vibrancy and fun of the open source world, not an article to be published in the esteemed Journal of Open Sourceology. So we leave it at that!