Federated learning is a machine learning technique that is receiving increased attention in diverse data driven application domains that have data privacy concerns. The essence of the concept is to train algorithms across decentralized servers, each holding their own local data samples, hence without the need to exchange potentially sensitive information. The construction of a common model is achieved through the exchange of derived data (gradients, parameters, weights etc). This design stands in contrast to traditional model estimation where all data reside (or are brought into one computational environment).

Federated learning enables multiple cooperating actors to build a common model without sharing data, thus addressing critical issues such as data privacy and data security which are particularly strict in regulated industries such as banking. The benefits of this mode of federated risk model development should be particularly tangible in risk domains and use cases where risk data are relatively scarce. Examples of such conditions are aboundant in credit risk applications, with the most extreme manifestation being the so-called low-default portfolios. Federated estimation of models can in such circumstances reduce or eliminate the data scarcity problem (under the assumption that on a pooled basis the available data are sufficient).

openLGD: an open source federated framework for the estimation of Loss Given Default models

openLGD is a Python powered library for the statistical estimation of Credit Risk Loss Given Default models. It can be used both as standalone library and in a federated learning context where data remain in distinct (separate) servers. The initial release demonstrates a basic federated estimation of an LGD model.

The implemented model of the initial release is a simple linear model with one explanatory factor (and synthetic data). Yet the implementation is sufficiently general (based on iterative stochastic gradient descent) that a large number of generalizations are possible.

The model estimation employs the concept of federated averaging. This is simply the averaging of model parameters (as those are estimated iteratively) on the basis of sample size.

Setup to run the demo

You should get a screenshot like this, illustrating iterative estimation of the model on the basis of the standalone server data: 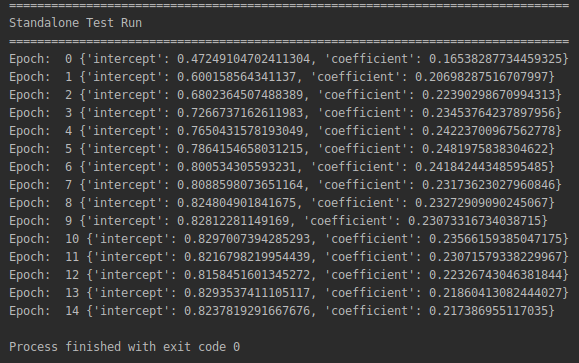 In order to make the demo easy to execute, we emulate a decentralized server environment (but all web servers are actually running on the same machine). In more realistic applications the data would be accessed from local databases. Here those are emulated with local filesystem storage under the server_dirs directory.

The general structure of the simplified API is 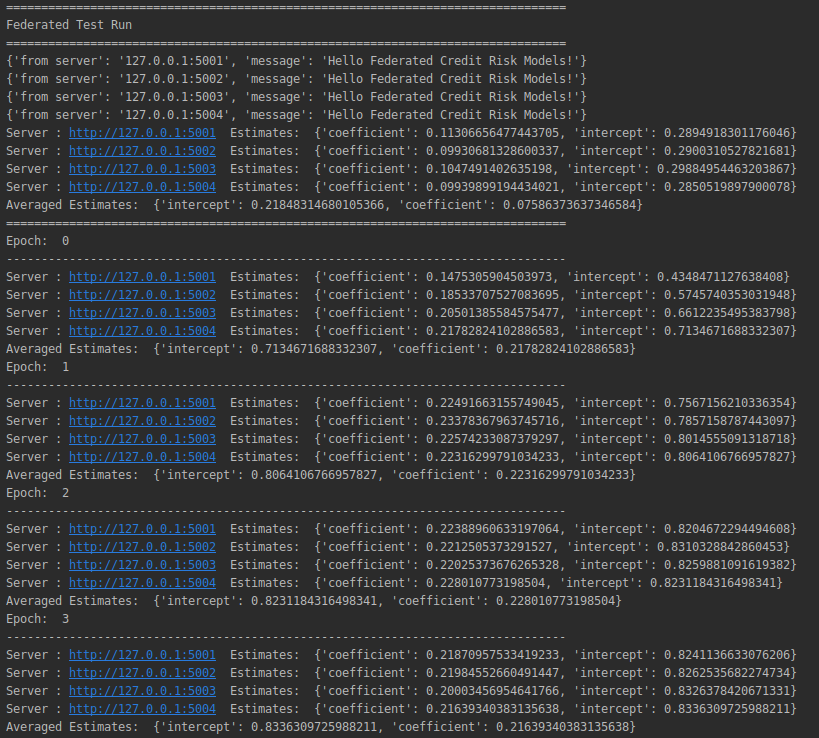 Conclusion, Challenges and Next Steps

The demo included in this first release of openLGD illustrates the feasibility of solving a longstanding problem plaguing the development of credit risk models (and loss-given-default models in particular), namely the adequacy of risk data for the robust estimation of models. Using open source libraries for machine learning and web server data exchange it is possible to design iterative estimation algorithms that converge towards a federated model without the exchange of actual data (only model parameters). Such federated models can then be used by participating actors as improvements or benchmarks to the standalone developed models.

The development of federated credit risk models still requires that the entities participating in the network agree to share substantial information that is (normally) internal. This includes, for example, variable vocabularies that would enable the mapping of internal data to a common data model and (in the federated averaging approach) information about sample size. Further, as the data are never shared, there is no validation and a malicious or negligent participant could compromise the quality of federated model

The adoption of open source, federated credit risk models that pool risk information without compromising data privacy could give a substantial boost to the quality of quantitative models. Interested parties who would like to explore the concept further are encouraged to get in touch.