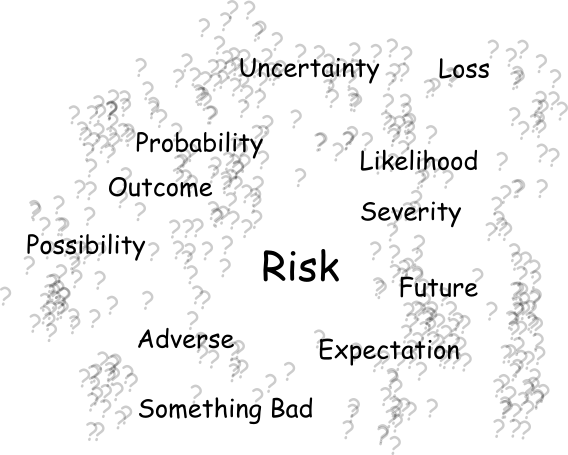 A survey of existing definitions

When looking up the meaning of risk we are immediately confronted with a surprising situation. There is no satisfying and authoritative general purpose one-liner that we can adopt without second thoughts.

Let us start with the standard dictionary definitions:

Further, if we lookup the wikipedia entry, the first sentence offers the following wording: Risk is the potential for uncontrolled loss of something of value. Immediately afterwards there is an entire section of various definitions:

If we turn, finally, towards the definition adopted by professional risk managers we get the somewhat controversial ISO 31000:2009 definition that states: Risk is the effect of uncertainty on objectives

When reviewing the above it is hard to conclude we don’t have a definitional problem:

Yes, but is this situation actually an issue?

For a concept that is of such major importance to everybody, a definition that is decidedly ambiguous and uncertain can negatively influence the quality of practical risk management efforts in all domains.

We are all equipped to understand risk at an intuitive level but much of ex-ante (that is, prior to a risk event) formal risk management involves analytic thinking. One of the important first steps in such a framework is risk identification. It stands to reason that it is easier to identify risks if we have a clear idea what we want to identify!

Furthermore, the quality and effectiveness of risk management efforts may depend on coordinated collective behaviors and developing consensus may be easier if there is conceptual agreement as to what is being managed.

Can we distill a better definition of risk?

Is a better definition even possible?

A definition that avoids many of the mistakes identified above could be along the lines of:

Hence under this definition Risk is but a subjective label that a specific entity puts on a subset of possible futures (states of the world).