In the first part of this series we motivated and defined the scope of a study explores Public Procurement data. In the second instalment we dug deeper into an important facet of the data, with the aim of constructing a meaningful economic representation of the public procurement process.

In this third installment we will link procurement entities to private sector sellers and through the sectoral profile of the procurement contract (CPV category) we will infer the amount of CO2 emissions that can be attributed to these activities.

The TED database covers a substantial (but not the entire) part of the public procurement lifecycle1 In the previous posts the analysis was geared more towards overall activity. Here we focus on the actual award of procurement contracts. For that purpose we filter all documents from the 2017-2021 period to select forms F03 and F06 (Contract award notice and Contract award notice - utilities respectively). This amounts to 982,794 contracts in total.

Narrowing down the currency universe

The contracts are specified in diverse currencies. For the above sample there are no less than 60 currencies in use! ( but many are used rather sparsely). In order to make a proper comparison, we will focus on the most prevalent currencies. We will translate to a common currency (EUR) using a reference exchange rate sourced from the ECB Statistical Data Warehouse2 as standardized SDMX dataflows.

Focusing on the main currencies as indicated above leaves us with 981,714 awarded contracts where the indicated contract total value is converted into EUR. One final general purpose filter we must apply is to remove outlier monetary values. As discussed in the first post, contract values that are either extremely low or extremely large are entered, so as to obfuscate the actual amount being contracted for. A simple way to avoid the serious bias introduced by this unfortunate practice is to remove extreme values3. After we apply this procedure we are left with 889,869 contracts.

The actual subject of the awarded contract (the precise nature of the goods, services or works to be delivered by the seller to the contracting entity) is not straightforward to identify. The details will in general be dispersed within the form as verbal descriptions (unstructured data). Further documents with technical criteria, specifications etc might be references and linked to but will be outside the TED database. The primary mechanism that provides easily accessible classification about what is being agreed is the CPV classification, to which we turn next.

The Common Procurement Vocabulary is the European statistical classification of goods and services procured by the public sector (established by law as the applicable taxonomy to classify tenders). In 1993 the European Commission decided to commence work on drafting its own nomenclature: the CPV system. The use of the CPV codes became mandatory as from 1 February 2006. The most recent version of the CPV is used for publication of tender notices in the Tenders Electronic Daily (TED). The CPV can be traced back to several international nomenclatures used to classify products:

The CPV consists of a Main Vocabulary and a Supplementary Vocabulary. Both are available in 22 official EU languages. The Main Vocabulary currently consists of about 9454 terms, listing goods, works and services commonly used in public Procurement. The CPV does not offer a structured description for each code, the scope of each term is simply inferred from the string (text) comprising its name. The CPV system is hierarchical with the following overall shape:

In this study we will only use the main CPV code of a contract and a mapping of products and services to CPA/NACE sectors to leverage EEIO databases and thus attribute GHG emissions to select components of the procurement portfolio. Let us get on with the task, bearing in mind that it is subject to a number of data and conceptual uncertainties!

The correspondence of the CPV with CPA/NACE is not straightforward, even though they are largely following similar economic reasoning. This is due to the adaptation of the former towards procurement community needs. There is a documented mapping in 4, which nevertheless is 1) only partial (utilizes multiple target nomenclatures) and 2) difficult to use as it is embedded in a PDF file5. Nevertheless, for our purposes we only need a high level mapping because the EEIO environmental footprint data are only available at such high level (Specifically Level 1 (and selectively Level 2) NACE categories).

The mapping of 82 CPV codes is done manually on the basis of descriptions. A fragment is indicated below, while the full mapping is available here

In common with other domains such (as corporate and financial sector), the attribution of GHG emissions is not unique but may adopt a number of rather distinct approaches. Each comes with their advantages and disadvantages. Information on greenhouse gas and other air emissions can be presented from three complementary perspectives:

The historically first approach is the so-called territorial approach which is closely related to the production based approach. This is the attribution of emissions to the entities (and sectors) that are directly responsible for (have most control over sources of emissions) within a geographical region. It is the original conceptual framework as advanced by the IPCC and is thus the basis of national inventories and targets. In terms of the geography of emissions attribution, the territorial approach is most closely aligned with the location of the sources6. On the other hand the consumption-based approach attempts to attribute emissions to the ultimate demand for consumption. Hence, the provision of a final product or service is not attributed only the specific quantum associated with a given stage of production, but the entire budget in its supply chain.

Public procurement represents final demand of the public sector (which ultimately provides services to households). The various sectors of the economy thus produce goods and services to satisfy both household demand and public sector demand and ideally the attribution framework will treat the entire economy consistently. Towards that end we adopt datasets produced by Eurostat as the basis for the attribution.7 Specifically, Eurostat produces the statistics with a production and consumption perspective and re-publishes the territorial statistics of the European Environmental Agency (EEA). For this exercise we will utilize emissions intensity estimates. Emissions intensities are ratios that assign an amount GHG released per monetary amount. This dataset presents intensity-ratios relating air emissions to economic parameters (value added, production output) for 64 industries (classified by NACE Rev. 2).

While in principle we can mechanically attribute GHG emissions to each individual awarded contract this would not be reflecting correctly the aggregate nature of the Eurostat datasets. Individual contracts (in particular if having specific GPP provisions and criteria) may have an environmental profile that materially deviates from their sectoral average. In such a case the appropriate approach to estimating impact would be, for example, as a GHG Project Protocol that estimates Business-as-Usual emissions alongside specific project based reduced emissions. Clearly such a tailored approach is much more data intensive, but is not in-principle incompatible with an allocation based on average profiles.

Grouping the contract portfolio by sector creates 8,216 distinct pools (differentiated also by the five annual periods). As a final simplification to reduce the complexity of further analysis we remove sector / country pools that have low number of contracts (less than two per year). This produces 4,649 pools. We can get a feel by looking at the aggregate top-ten sector / countries in terms of monetary value

We are now ready to convert the monetary aggregates into equivalent tonnes of CO2 emissions. There is one more detail to take care of: the Eurostat sectoral emissions intensities occasionally are provided also in Level-2 (Division) granularity, such as “E37 to E39” as opposed to simply “E”. For the purpose of a first visualization we will only calculate top-level emissions. 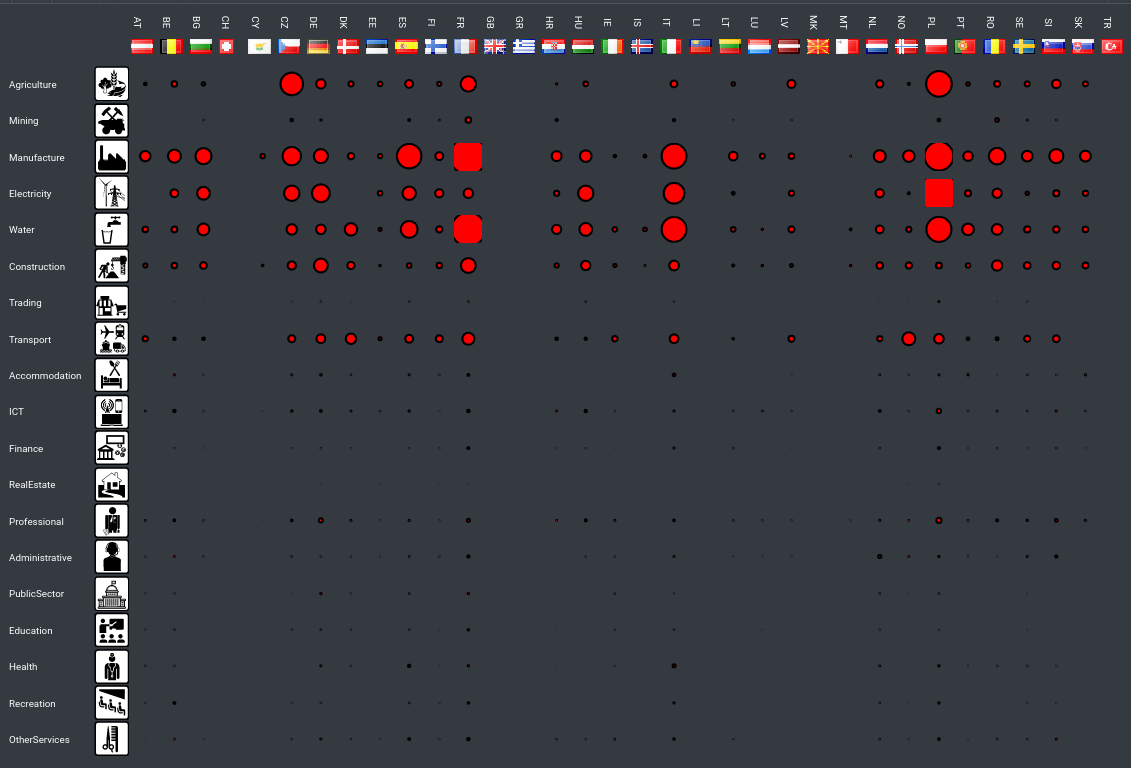 With the many caveats and assumptions mentioned we have arrived at the first visual map of public-procurement linked GHG emissions at EU level!

Next Posts in the Series:

In this section we continue listing various open resources (data, code, standards) that have been used for the discussion (incrementally over previous posts, so as not to produce and repeat excessively long lists)